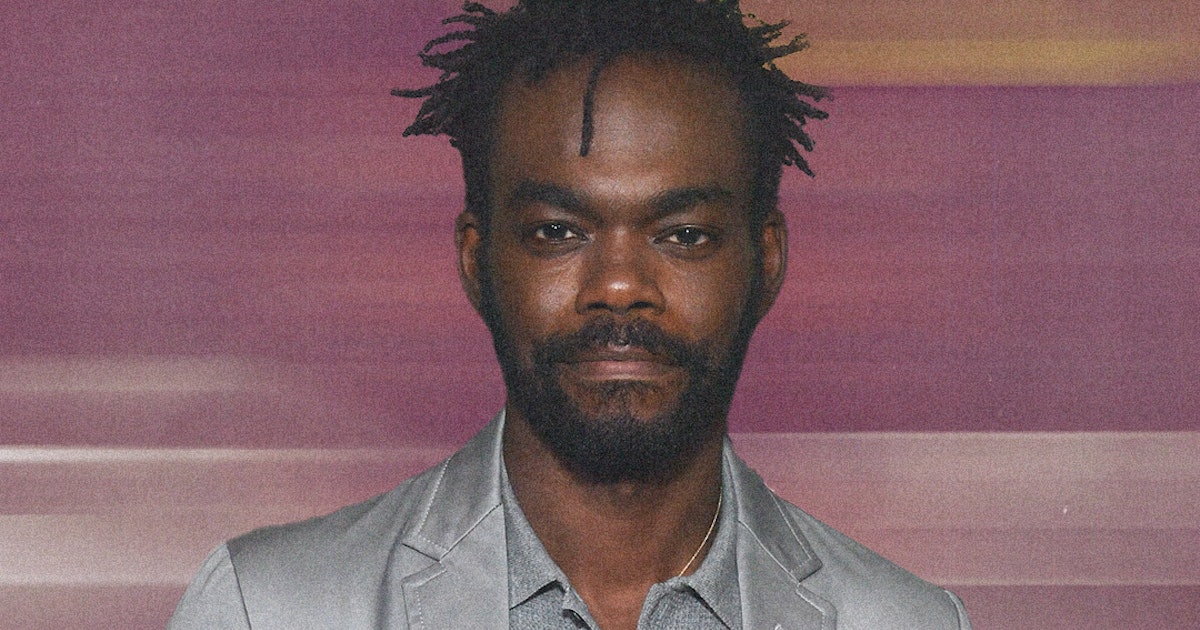 William Jackson Harper’s love of drumming began in church. As a child, the actor watched in awe as his local congregation’s house drummer perform during the weekly service. And even though he was too shy to join the small group of devotees who took turns on the drums after the ceremony, he still found his own way to get in on the action.

“I used to take my drum sticks to church and bang on the pew that long,” Harper says O on Zoom laughing. “I had a friend who had a kit and I went to his house for a birthday. It was fourth year or something, and I got behind the kit for the first time and played, and I absolutely loved it.

Over the years, Harper played the drums on and off – sneaking into his high school auditorium to try his hand before a big gig, buying and experimenting with his first kit in his early twenties, and learning enough to play. in a few small bands in his native Dallas and his own band in New York, but he reiterates that he was never under any illusions about his skills as a beginner drummer. In other words, he has no intention of quitting his day job anytime soon.

After rising to fame as the perpetually overworked ethics professor Chidi Anagonye on NBC’s The right placeHarper—whose other screen credits include The electricity company, Midsommarand The Underground Railroad— stepped into his first starring role in the second season of HBO Max’s rom-com anthology, Love life. His latest project, Peacock’s The complexfinds him in another starring role, albeit one in which his character struggles to stay in his waning marriage on an ill-fated birthday trip rather than navigating the New York dating scene as a black man newly divorced.

Created by Andy Siara, The complex, which premiered July 28, follows Noah (Harper) and Emma (Cristin Milioti), an unhappily married couple embroiled in one of Yucatan’s most bizarre unsolved mysteries when they set out to solve a pair of disappearances. happened fifteen years ago. The “propulsive” and genre-blurring nature of the show – which mixes murder mystery, dark comedy and relationship drama – was part of the immediate appeal for Harper, who found the premise and the first two scripts “funny and very uncomfortable. , as it deals with a relationship that turns into more of a friendship.

“I think a lot of people are in relationships that they’re too comfortable to leave, or the passion is gone but the love is still there and they don’t know exactly what to do about it,” says- he. “Stories are allowed to be most surprising when you go in and out of everyday things that are deeply grounded in goofy comedy – and there’s something about comedy that disarms you for those punches that might come later.”

Below, Harper reminisces about her fondest memories from filming the eight-episode first season of The complex in Puerto Rico, and the fledgling rock band he formed with a group of actors in New York (they just released their first album last Tuesday).

The complex mark a reunion for you and Cristin Milioti, with whom you starred in the play After the explosion in 2017. What does she bring to the table as an actor that makes her such a successful collaborator?

We met while doing theater in New York, and we really got to know each other while working on this play. It was intense – we were also playing a couple in marital distress. She is a very special performer; every choice she makes is organic, unique, and specific, and she doesn’t lean into the idea of ​​what a scene is supposed to be. I will say that when we first met, I thought she was so cool that I was intimidated. And over the years, I’ve learned, “Oh, she’s a weirdo and a laughing-head like all of us.”

Are there any memories that come out of working with the local cast and crew in Puerto Rico?

It’s hard to shoot there, just because it’s really hot and humid, so a lot of us were wilting. They always told us to drink water and we tried our best, but the crew was amazing. We shot in some places that were really challenging, and everyone brought their best game while keeping a really positive attitude and being nice and funny. I feel like I spent time with this cast more than any other cast I’ve been with, because every day something came out of left field and made it harder. [Laughs.] We needed to decompress a lot, and we did.

Honestly, my favorite memory went to El Yunque, which is the state forest there. We’ve done it a few times, and we’d swim in waterfalls and do these really tough hikes. We spent a lot of time in Old San Juan, on the beach or in the woods, getting weird.

Thanks to your work on The right place, you were able to expand the representation of black masculinity on screen by playing a nerd that you and so many other viewers could relate to. How has this experience changed the way you move through the world as an actor and as a person?

There are certain traits that we both share. I’m a pretty anxious guy, and that’s something I always try to hide, because as a man of a certain age, it feels like you’re not supposed to be nervous all the time with people – and I am. There are a lot of guys who have the same mental quirks as me. In the media, we don’t see many black guys exhibiting these traits. It’s not like I’m the only anxious black guy on TV — there are quite a few — but it’s not the broadest interpretation of black masculinity we often see.

The guys who reached out to me said, “I haven’t seen a guy like that on TV in a while, and it was therapeutic to watch him struggle like he did and have his moments. .” I just bring things that are me into these characters, and this is what those features look like on a black body.

How do you choose projects at this stage of your career?

I always try to make sure that the project I’m going to do is different from the project I just did; I don’t want to go to the same emotional good every time. The fun of being an actor is that you can try different things – sometimes it’s a slight difference, sometimes it’s a little bigger – but I’m looking for things to be very different from project to project. other. I want to be able to play a variety of roles and have a variety of experiences. If I did the same thing over and over again, it would start to feel more like a job and less like a calling, as it does for me right now.

What do you think about being constantly “fancasted” for the next The Fantastic Four film?

I guess that’s cool, but Twitter doesn’t show movies. [Laughs.] And it’s really cute, I’m getting a kick out of it. But Marvel didn’t call me, and I’m pretty sure everyone in that movie did. So I’m flattered, but I’m not holding my breath.

You’ve mentioned in previous interviews that you’re a bit of a music fan and chose the drums as a fun thing. How do you rate your own skills on a scale from novice to expert?

I’m definitely a newbie. I never really studied it; it was so rare that I could get behind a kit and play. We couldn’t afford one when I was younger, so I never owned one. But once in a while, if there was one sitting in my high school auditorium, if they were getting ready to do some kind of concert with the jazz band and there was no one there, I sneaked around and played.

But I really started playing more consistently after college and bought a kit in my early twenties. It was just sitting in the dining room, and every once in a while I played and annoyed the neighbors. I was loud and wasn’t very good, but I was having a good time, then I got a little better and played in some bands in Dallas, just a few gigs here and there. When I moved to New York, I put away this kit. I really don’t feel like playing a kit in my New York apartment – it’s the fastest way to get a whole bunch of enemies – so I haven’t played much for a while. Over the past five to seven years, I’ve had it back.

Who are your favorite drummers?

I really loved Neil Peart, the drummer of Rush. I’ve always been a big fan of Art Blakey, Max Roach – they’re jazz guys, but they played in this explosive way with these really interesting girls. Every drummer I love is a drummer who does things I never imagined I could do in a million years.

You also play music in a band called The U.S. Open with a few other actors. Who else is in this group?

The group is composed of Steve Boyer, Jeff Biehl, Diana Oh, Shawn RandallBobby Moreno and myself. We all met doing theater, and Bobby picked up a guitar and started learning to play, and then he was like, “Hey, you know what? I think I want to start a band. And we’re like, “Yeah, cool.” I happen to play drums, Steve plays guitar, Jeff learned bass just to start playing with us, and Diana is this crazy multi-artist and one hell of a singer. Shawn is an excellent improv singer and keyboard player.

We all got together and started jamming and doing covers and playing the songs we like – usually rock, because that’s what we had the instrumentation for – and then we wrote our own songs. It’s supposed to be fun; it’s that thing that’s not related to my livelihood. I take a big kick out of it. It’s really cathartic for me. I love going to a room with my friends and playing the drums and sweating and sometimes doing a song and sometimes making a whole lot of noise.

Where does the name come from?

There is this [indie-pop] band I like called Tennis, and I thought the name was cool. We were joking about the names of the band, and I brought it up, and Steve said, “So what? Should we be, like, the US Open? And we’re like, “Oh no! Not that! But wait…” Since then, we have been called the US Open.

How often do you meet in person to train?

This is [only] when we’re all free, because we’re all actors and we’re usually out of town or doing a play. So whenever we have free time together, we jam, and sometimes we write songs and play gigs. But it’s really just for us. And once in a while, we like to share it with our friends. Our schedules are so erratic and hectic, and two of the guys are parents now, so it’s getting harder and harder to get together [regularly].

you just left your first album. Do you plan to make more music or play some gigs in the future?

Yes, we are definitely planning to do more music, but we’ll see if these songs see the light of day! [Laughs.] Hopefully our schedules will line up and we’ll play a few gigs and invite all our friends over, and hopefully we won’t trip over ourselves in the songs, and we’ll stick together as a band because we play so rarely that we get adrenaline pumping when playing in front of people. I like to manage expectations. We are certainly not pros; we really like to play together.