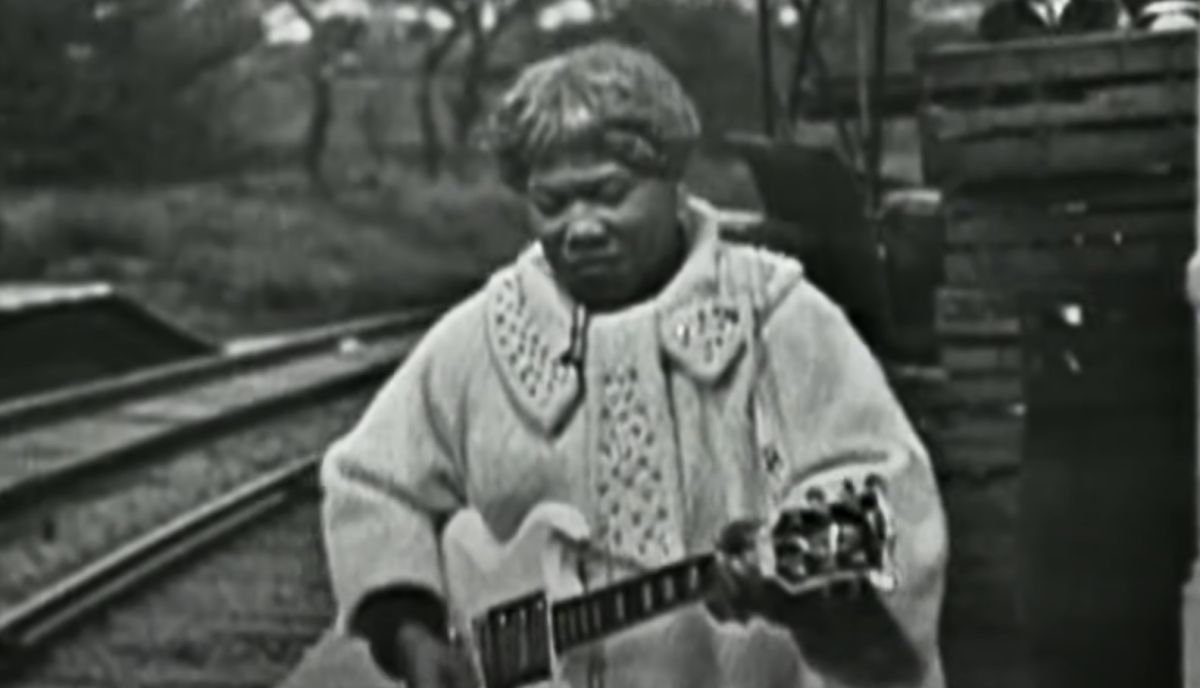 On May 7, 1964, a who’s who of future blues guitar luminaries – among them Eric Clapton, Jeff Beck, Keith Richards and Brian Jones – gathered, along with a number of other enthusiastic blues fans, at Wilbraham Road station in south Manchester.

Clapton, Beck and company. had travel to the disused train station from London to see a sight like no other – the Blues and Gospel train.

Staged spectacularly on the station’s platform – with the audience at one end of the tracks and the performers at the other – and filmed for a special in Granada, the show brought together a stunning lineup of giants from the blues: Sister Rosetta Tharpe, Muddy Waters, Sonny Terry and Brownie McGhee, Cousin Joe, Otis Spann and Reverend Gary Davis.

While all of the aforementioned blues legends brought their A game, it was Tharpe – brought to the stage in style in a horse-drawn carriage – who completely stole the show.

Inspired by the downpour that had hit the station shortly before his arrival, Tharpe decided to open his set with a ferocious rendition of the gospel standard, Didn’t it rain.

Armed with his beloved three-pickup 1961 Gibson Les Paul SG Custom, Tharpe groomed those in attendance—and the valued 10 million viewers who would later watch the show at home – to a display of hard-hitting, hard-hitting blues guitar fire that was years ahead of its time.

You can draw direct lines, for example, from Tharpe’s smooth but still pocket-sized rhythm work to Richards’ later playing with the Rolling Stones, and hear the influence his lyrical slides would have on the already big fan Jones. by slide master Elmore James.

You can see Tharpe Didn’t it rain performance above, and the full Blues and Gospel train TV special below.

Wielding Custom Shop replicas of Tharpe’s 1961 Les Paul SG Custom, the duo put on their own unaccompanied twist Didn’t it rainwhile retaining the spirit and passion of the original.

“She [Tharpe] captivated audiences and inspired countless blues-loving players across the Atlantic, the likes of Eric Clapton and Keith Richards,” Celisse says in the film. “There’s an endless list of artists who borrowed from Sister Rosetta – people like Elvis, Johnny Cash, Led Zeppelin, Little Richard, Jerry Lee Lewis, Chuck Berry, even me!

“Sister Rosetta Tharpe was born to be on stage and channel her joy of faith through her powerful voice and volcanic playing. She took audiences to church and her male contemporaries playing guitar to school.

“Although it took decades to finally give her her due,” Celisse concludes, “there is no debating that Sister Rosetta Tharpe is the undisputed founding mother of rock ‘n’ roll.”

Although popular and commercially successful in her day, Tharpe – who died in 1973 and buried in an unmarked grave in Philadelphia – only recently began to be recognized as one of the formative figures of blues and rock electric guitar playing.

In 2018, decades after many of the guitarists whose styles she helped shape received the same honor, Tharpe was finally inducted to the Rock & Roll Hall Of Fame in the “Early Influences” category.