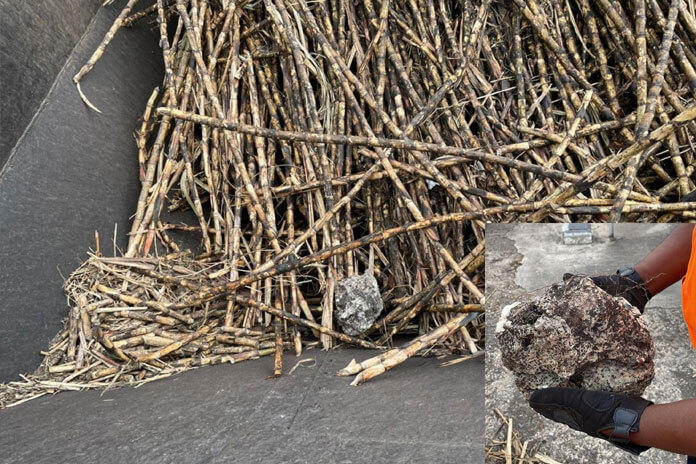 The sugar season starts with difficulty

ORANGE MARKET, Mon Jan 3, 2022 – This year’s sugarcane crop crushing season has finally started after a two week delay. The cane-crushing company, ASR / BSI, and the Belize Sugar Cane Farmers Association (BSCFA) disagreed over the terms of a new trade deal and the signing of an interim contract. After an intervention by Cabinet ministers who represent the constituencies of the northern districts, including the Prime Minister, the Hon. John Briceño, the interim agreement was signed before the end of 2021, a sign of hope for the new year. However, the delivery of sugarcane to the factory had to be cut off again so that the factory could make repairs to a faulty industrial boiler over the weekend, and although farmers suspect this further delay was an act of spite on the part of the factory, ASR / BSI workers have their own suspicions about possible sabotage attempts by BFSCA members after a huge stone was found in a cane lot on the unloading table intended to be crushed. This rock could have caused considerable damage to the plant’s equipment.

Due to the size of the rock, those at the mill find it hard to believe that the presence of the rock in the middle of the cane was accidental, and while an investigation into the matter is underway, the Chairman of the Board of Control from the sugar industry, Marcos Osorio, says it’s too early to say whether the rock’s presence was an accident or a deliberate act of sabotage. Right now, however, the focus is on starting the crushing of the cane that has been in the trucks for days now, losing quality as the days go by.

It is estimated that 360 tonnes of sugarcane (about 16-18 tonnes in each truck) were packed into these 20 or so trucks which formed a blockade outside the delivery gate in the compound. ASR / BSI’s Tower Hill plant for approximately three days. Industry experts say that the quality of this load of sugarcane will be drastically reduced, which will likely lead to lower incomes from this transport for farmers and the factory. Osorio hopes that all the sugar cane from these trucks can be ground in the coming days.

So, when the sugar harvest started less well, the grinding began. Trucks have been removed from the entrance to the mill since last week and were allowed today to enter those same gates to deliver the first batch of their sugar cane. According to Andrew Westby, president of BSCFA, the grinding started around 10 a.m. today. He thanked the Prime Minister, the Hon. John Briceño and his team for their efforts to negotiate the agreement with the factory and ensure the delivery of the sugar cane until the end of the harvest.

Due to the legal challenges that may arise from the actions of the BSCFA, the Prime Minister also delivered a compensation agreement to the association which transfers legal responsibility to the government for any claims brought to court by those who have suffered losses in reason for these actions.

After strong tensions in the northern districts in recent weeks, the sugar harvest, a bumper crop, has started to be processed by the mill. However, the signing of a new commercial agreement between ASR / BSI and BSCFA remains pending, since this interim agreement which has allowed the sugar industry to remain intact, expires at the end of July this year. By then, the parties hope to have reached a new agreement.