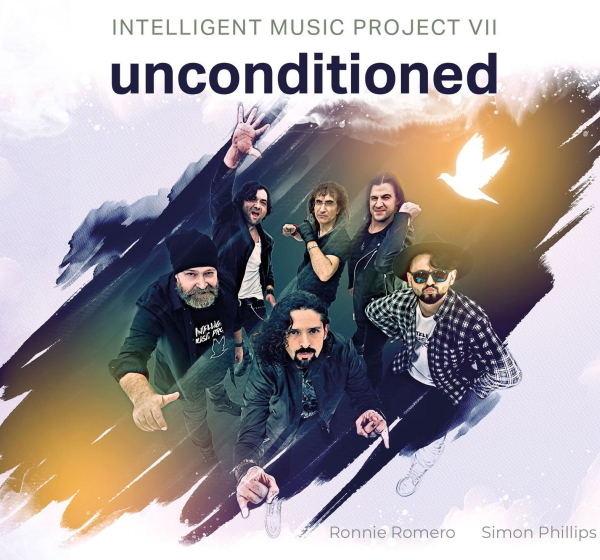 Legendary Simon Phillips (TOTO, Protocol) returns as percussionist and musical co-producer on the new album, while the lead singer on this release will once again be one of the most popular names in rock music today: Ronnie Romero (Rainbow, MSG) . This will be Romero’s third album with Intelligent Music Project, and for the first time the band have broadened their compositional approach: two of the songs and their arrangements are entirely the work of Ronnie, Biser Ivanov and Ivo Stefanov. For the first time on “Unconditioned”, the singer of the group shows his talents as a lyricist, after having written the lyrics of these two songs. All other songs and lyrics are once again the creation of Intelligent Music Project founder and producer Dr. Milen Vrabevski.

In honor of the tenth anniversary of the band’s debut album, “The Power Of Mind”, the seventh album follows its format and also begins and ends with instrumental tracks written by Dr. Milen Vrabevski in collaboration with Biser Ivanov and Ivo Stefanov .

“’Unconditioned’ is an album dedicated to unconditional love as a decisive factor in the normalization of our modern life. This love must focus above all on our children, because they are the future, while it is we who must show them the way and teach them to make bold decisions and to live for the people around them. Only with more such people will the world become a better place” – Dr. Vrabevski on the new album

One of the hit tracks from “Unconditioned” is “Intention” – the song the band performed as Bulgaria’s representative at Eurovision 2022 in Turin. Along with the Eurovision version, the album will also include the original, longer take that sticks to the Intelligent Music Project’s signature melodic progressive style, as well as a backing track version.

“Intention” was the lead single from Intelligent Music Project’s seventh album. At present, the song has over two and a half million views/listenings on YouTube and Spotify. The song raises the question of each individual’s personal and internal battle with outdated patterns of beliefs and behaviors that hold them back. Starting from the title itself, the author emphasizes the simple fact that it is never too late to embark on the right path – that of one’s own personal growth, of a dignified existence and of a life with a mission. The song calls us to turn away from our ego, selfishness and consumerist attitude about life and instead live for the people around us.

“Finding the right path, however, often turns into a battle with yourself, so you need serious intention to really make a change!” – Dr. Milen Vrabevski, author of the music and lyrics of the “Intention” notes.

The album’s second single, “New Hero”, was released in early May. The song was accompanied by a striking video that recreated a military atmosphere, where, in line with the idea behind the album, the main characters were children. In the video’s narrative, it is precisely the children who prove to be the brave heroes who bring about change.

“Effective action in the present, despite the difficulties, is the key to progress. It is crucial for us to know that pretty words get us nowhere. It’s easy to stay silent and do what you’re told. The hardest thing but the only effective thing is for a person to have their own opinion, their own method of resisting injustice, even if it means that they often find themselves alone and misunderstood,” explains Dr. Vrabevski.

The album will be released on July 27, the day of Ronnie Romero’s wedding to Romanian model and dentist, Dr. Corina Minda.


EIN Presswire’s priority is source transparency. We don’t allow opaque clients and our editors try to be careful not to weed out false and misleading content. As a user, if you see something we missed, please bring it to our attention. Your help is welcome. EIN Presswire, Everyone’s Internet News Presswire™, attempts to define some of the boundaries that are reasonable in today’s world. Please see our editorial guidelines for more information.

Kershaw to start All-Star Game for NL, McClanahan for AL