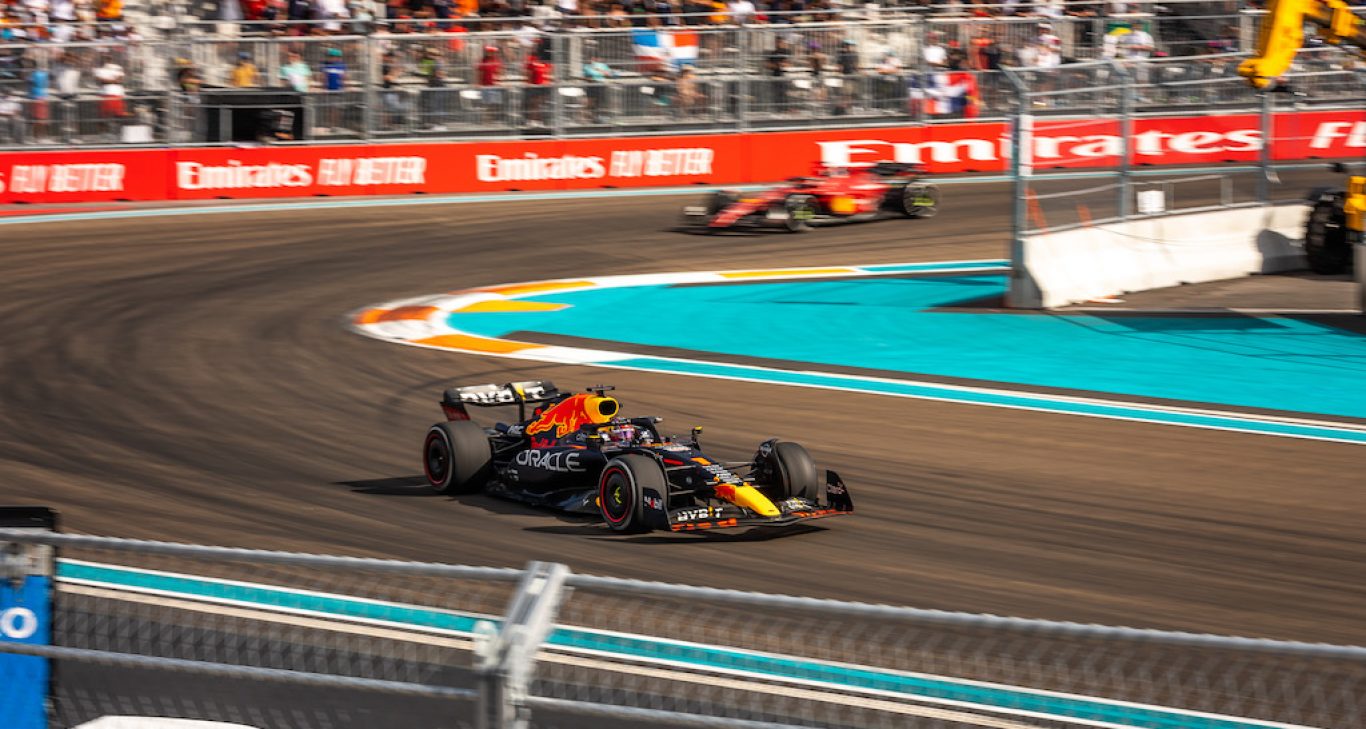 For the first time ever, Miami hosted the Formula 1 Grand Prix. Miami was buzzing last week with luxury cars, events, champagne and paddocks. As first-time hosts, Miami wanted to show attendees a good time – like only Miami can. Haute Living takes you through the weekend’s ‘Haute-est’ events – from McLaren to Carbone Beach to Hard Rock Stadium.

Taking place at Hard Rock Stadium before the mayhem began for the weekend, this launch party was led by world famous DJ Kygo and sponsored by Heineken. Thousands of fans gathered to celebrate the start of the first Miami Grand Prix race weekend. F1® drivers, team principals and racers also took to the stage to entertain the crowd. Kygo arrived soon after with many famous friends, including singer-songwriter Justin Jesso, Latinx superstar Anitta, and Joe Jonas-led band DNCE. Even F1 driver Lando Norris took to the stage to try his hand at the DJ tables!

“The opening night with musical performances presented by Heineken® was an unforgettable way to introduce the stars of Formula 1® to the fans and to celebrate the start of our very first race in Miami with a brilliant performance from Kygo and ‘special guests,’ said Richard Cregan, CEO, Formula 1 Crypto.com Grand Prix of Miami.

Belvedere hosted an intimate Race Week Kick-Off Dinner to celebrate F1 in Miami and their new cocktail with the CEO and new Creative Director. The Belvedere Raspberry Circuit is inspired by the energy of F1 and features vodka, raspberry puree and lime to create a refreshing drink to enjoy in the Florida sun. The drink is also topped off with a garnish of five raspberries as a cheeky nod to the five iconic red lights at the top of each race.

Heineken ‘When you drive, never drink’ campaign party with McLaren

Global Partner of Formula 1, Heineken recently launched a “When you drive, never drink” campaign to support their 0.0% beer. With the help of familiar F1 faces such as McLaren Racing driver Daniel Ricciardo and Oracle Red Bull Racing driver Sergio Perez, Heineken released a short advert to help spread the message to never drink and drive.

At the campaign launch party in Miami Beach, there were McLaren race cars on display, fully stocked Heineken bars, as well as a simulated racing game where attendees got to take their best shot behind the wheel.

Also as part of the campaign, throughout the weekend lucky fans were surprised in bars and entertainment venues with a once-in-a-lifetime opportunity to ride in a McLaren Supercar Heineken to the Miami Grand Prix. 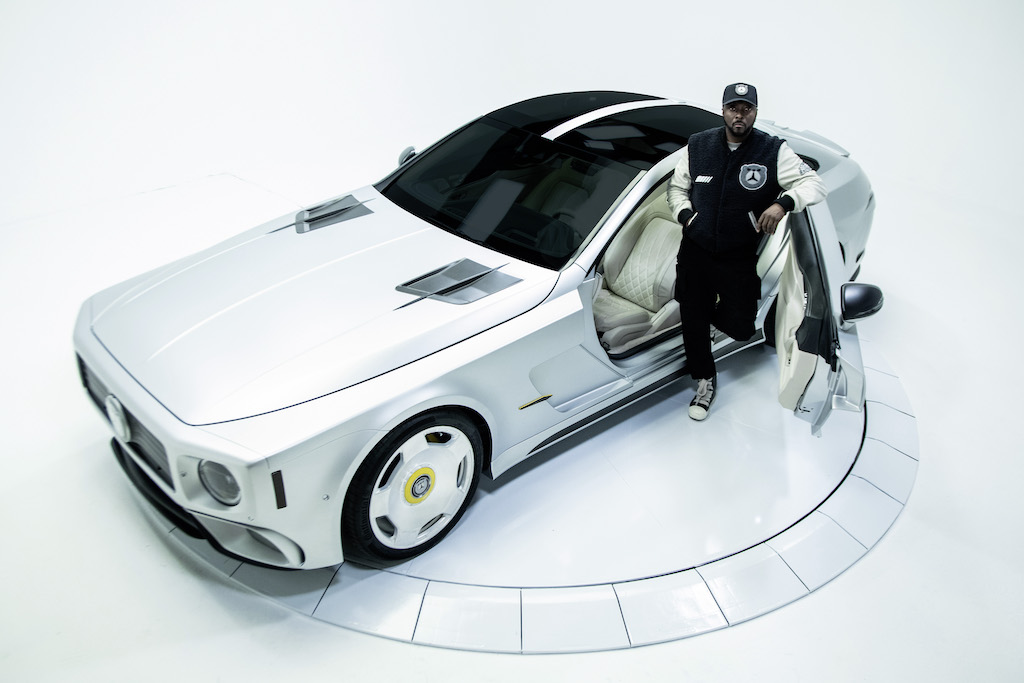 In the heart of Miami’s Design District, Grammy-winning artist will.i.am has teamed up with Mercedes-AMG to unveil an exclusive one-of-a-kind vehicle he designed himself called WILL.I .AMG. The mission of this joint project is to give students from disadvantaged communities access to STEAM education. The event featured many stars who came out to support the mission including Jamie Foxx, Swizz Beatz, Lewis Hamilton, DJ Khaled, Ludacris, Timbaland, and more.

Dinner at Carbone Beach was one of the most star-studded events of the weekend. The highly sought-after Carbone Restaurant has settled on the shores of Miami Beach for a 2-night dinner in honor of F1. Dinner was prepared by Chef Mario Carbone himself and the menu included signature dishes from his Michelin-starred restaurant. 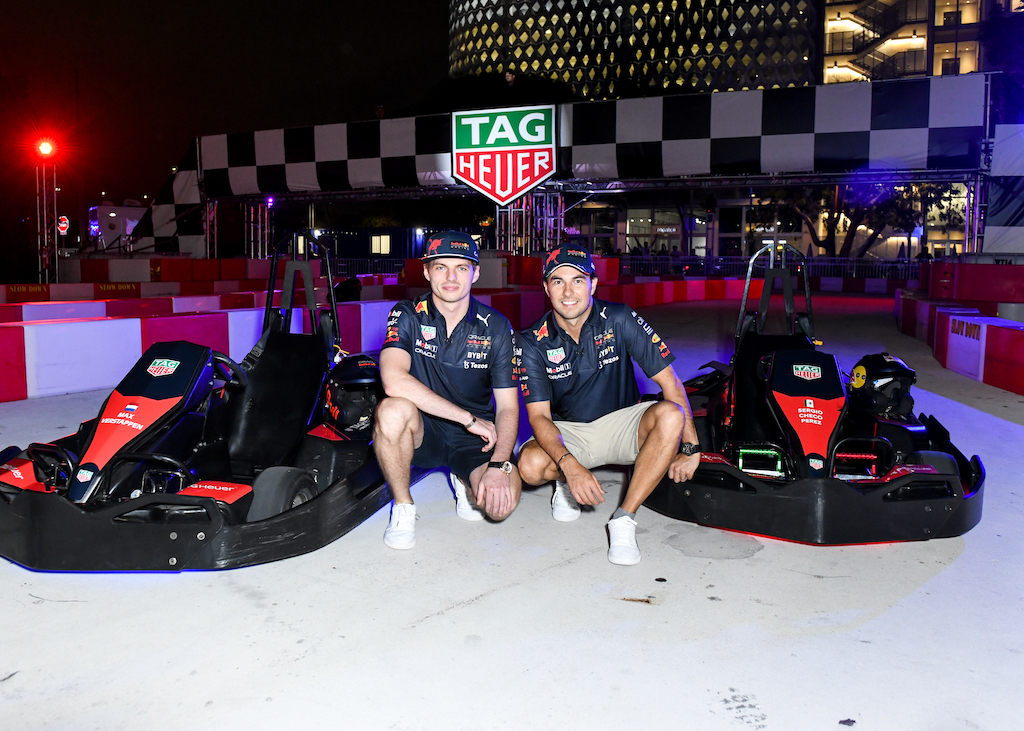 Luxury watch brand, Tag Heuer, hosted a private cocktail party at Jungle Plaza in the Miami Design District. This exclusive event brought together collectors, celebrities and friends of the brand who came together to celebrate the partnership with Formula 1 team Oracle Red Bull Racing. The occasion also included a go-kart experience and guests cheered from the sideline as they watched TAG Heuer ambassadors and reigning world champion Max Verstappen and Oracle Red Bull Racing teammate Checo Perez put the pedal to the metal during of an intense race around the track.

From Friday 6 May to Sunday 8 May 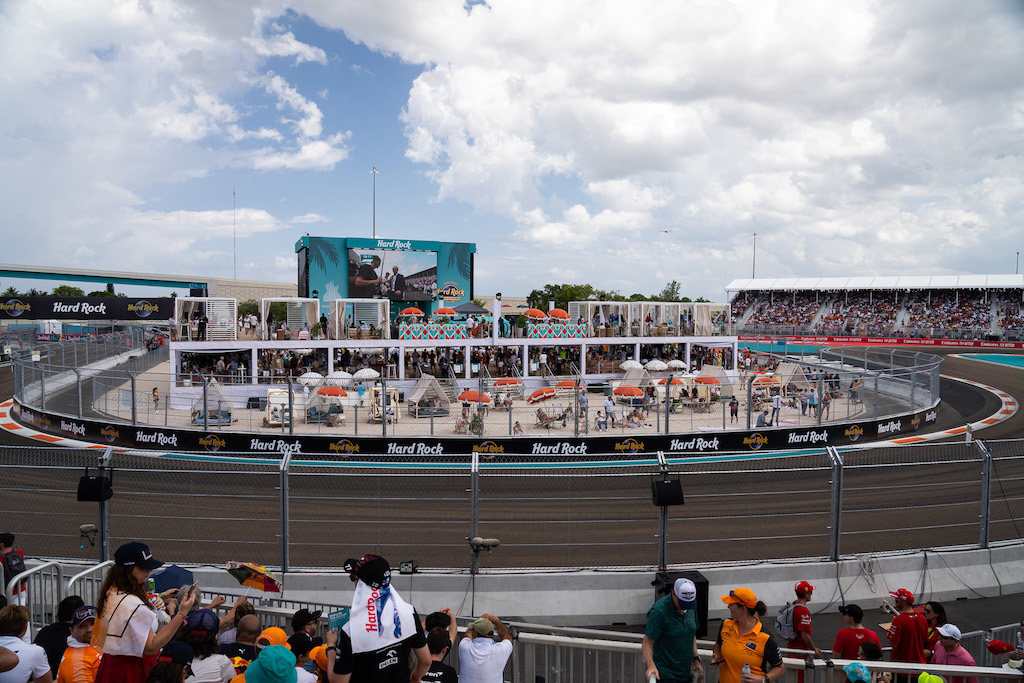 Last, but not least, the Formula 1 race itself! Full of food, drink, games, cars and luxuries, Miami’s premier race will be unforgettable. The event took place over three days and included practice rounds, the W Series and the Miami Grand Prix. 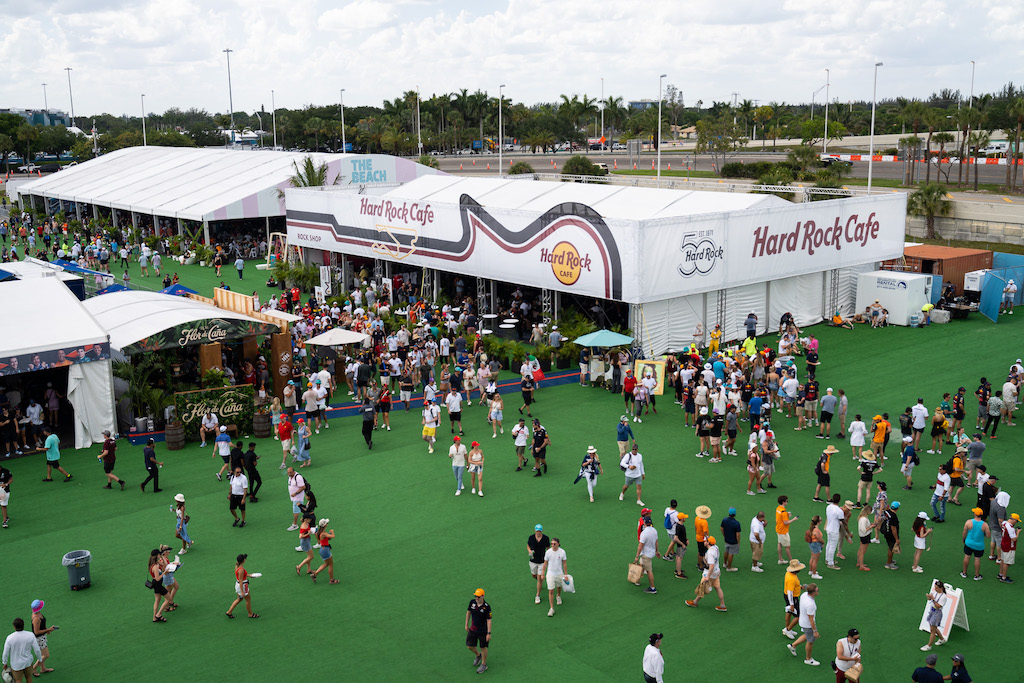 Taking place at Hard Rock Stadium, the venue included a few niche areas to give attendees a taste of that Miami life. In the marina, there were yachts floating in fake water, and a short walk away was Luxury Row where each automaker had its own designated area for fun and drinks. The Bal Harbor stores had a pop-up area equipped with a mini-racetrack and cars for guests to play with. On the West Side Campus there were life-size games such as a driving simulator, reaction timing game, impersonating F1 winners on the platform and even the chance to try your hand to be part of a pit crew. 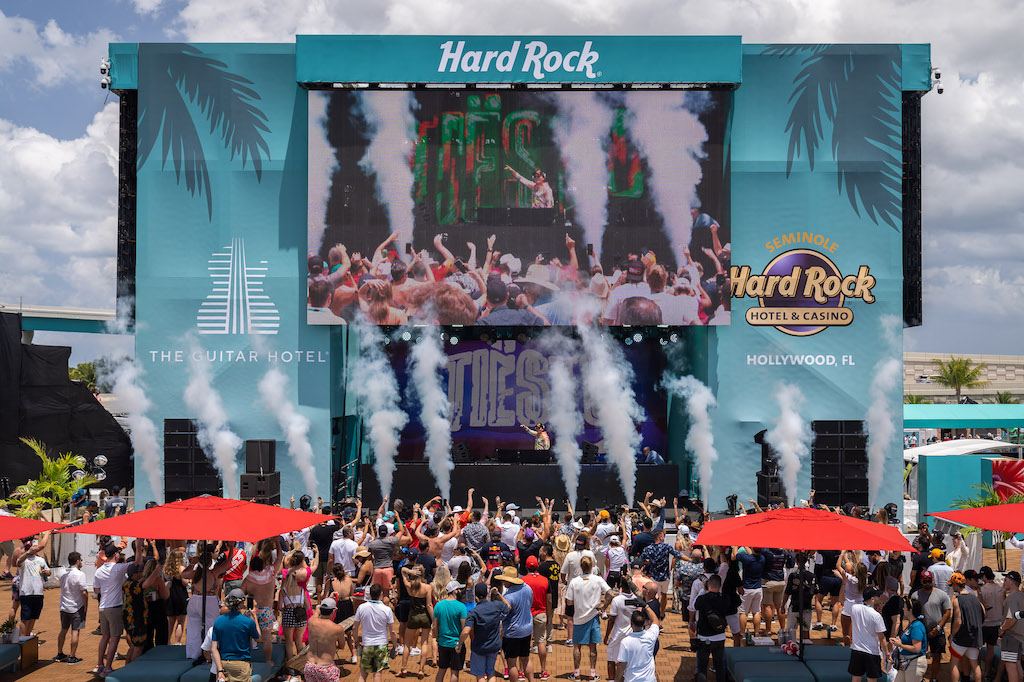 On the other side was the Hard Rock Beach Club equipped with real sand and cabanas, bringing iconic Miami Beach to Formula 1. The beach club included a stage where many notable artists performed throughout over the weekend, such as Post Malone, Zedd, Tiesto, and The Chainsmokers.

“It was an incredible atmosphere, it was really well organized. It’s not easy to organize an event like this and they did an amazing job and I had a lot of fun driving,” said race winner Verstappen. “The atmosphere was incredible — it’s great to see how much interest the sport has generated over the past few years,” said Leclerc. “The organization was great with lots of people and good weather. It was amazing to be here. 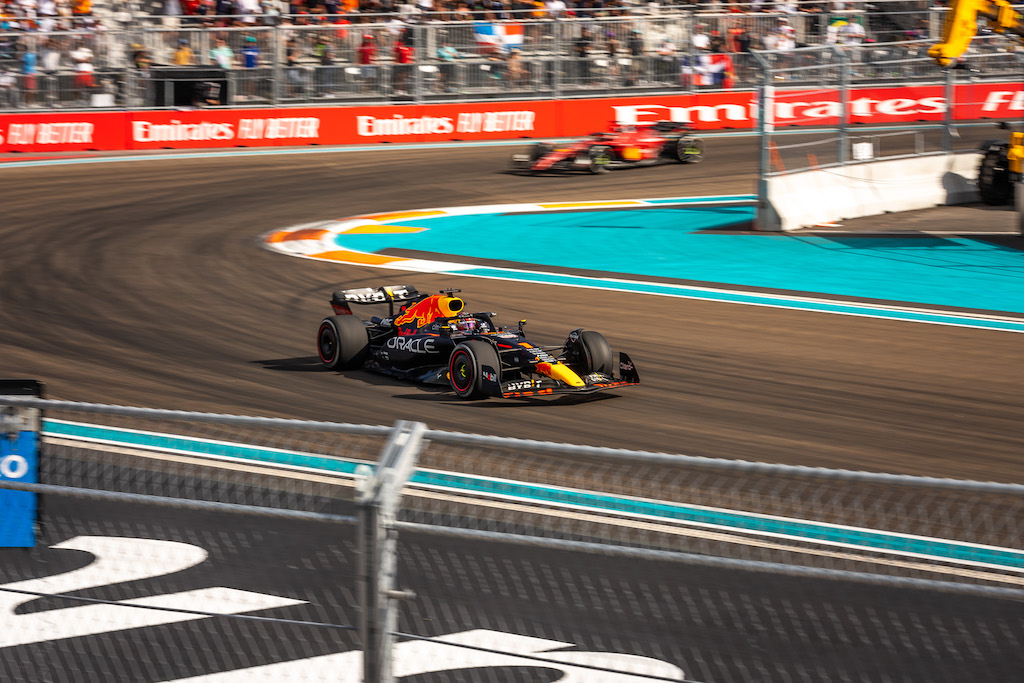