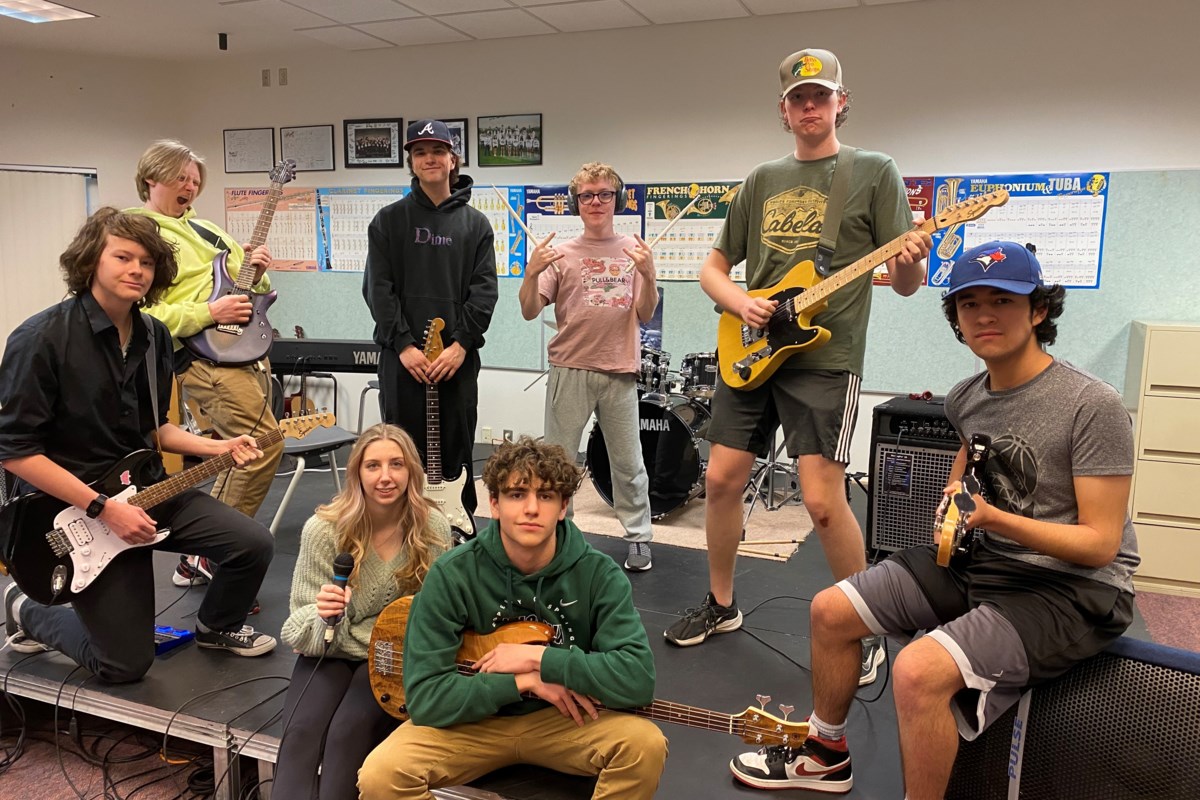 For those about to tip over, Springbank salutes you.

Move over, Jack Black – there’s a new school of rock in session.

A Springbank High School teacher encourages his students to unleash their inner rock star through his own rock school, allowing students to try their hand at playing their favorite rock ‘n’ roll-inspired instrument, learning the ins and outs the outs of belonging to a group, and even performing in front of a live audience.

According to Colin Chrabaszcz, music educator at Springbank Community High School (SCHS), the concept of the rock band class evolved over several years, beginning with a guitar lesson for students interested in playing electric and acoustic guitar.

He said the class was popular among guitar enthusiasts, but added that he felt limited with only one instrument on offer. He then decided to open it up to singers, drummers and bassists to join the ranks.

“You can’t do so much when you only have one instrument,” he said, adding that talented guitarists crave a fuller experience. “You can’t do anything more unless you have a full party.”

He said he began experimenting with various class concepts and inquired among SCHS students to determine if there were any students who played other rock instruments.

With growing demand, the idea quickly came to life.

“We just started putting bands together where they performed cover songs,” he said. “From there, I realized there was a need and a desire for students to take the instruments that they already know quite well, rock-wise, and make a band out of them.”

Chrabaszcz added that teenagers aspiring to a life as a musician often find forming and organizing a band a challenge, so he sought to teach his students proper band etiquette, such as how to organize bands. concerts, set up equipment, etc.

“I converted this classical guitar lesson into a rock band lesson where I help them understand the ins and outs of what it means to be in a band and how to put music together with other musicians “, did he declare.

He said that over the past two years, talented students have helped make the class what it is today.

“This year we have amazing music happening where we work together,” he said. “And then we got to play in front of the school and I think that really showcased the great work and the great music that we’re able to do in the [class].”

He added that the idea for class and concept exploration originated before the COVID-19 pandemic and an official class was formed in 2020 when classes were canceled due to increased restrictions. of public health.

“We were about to make our first debut of wicked music and that’s when the first stoppage happened,” he said. “There was a huge disappointment where we had the ball, we had something really amazing and things came to a halt.

“When it happened I was terrified because it was just something new starting to bloom.”

Chrabaszcz said he fears the work students have done over the past two years to grow the class will be lost during the closures. He said he was worried it might take longer to relaunch the concept once in-person classes resume.

Fortunately, his fears were never realized and when they returned to school, the students of the rock band picked up where they left off.

“It was the first year we had a normal school year and I happened to put the right people in the right place at the same time, and we’ve been on the move ever since,” he said.

He added that the students practice and perform a wide variety of music, from current pop songs, lyrical numbers and rock ballads to twangy country tunes.

“When I have students in the class, everyone wants to play their own style of music, but as a group you have to understand that everyone has their own passion for different genres,” he said. “So what I do is I ask each student, ‘What song do you absolutely want to play in this class?’

“I make sure everyone makes their choice and we have this agreement in the space that I’m going to play your song because I know you’re going to play my song.”

After a school year filled with practice and preparation, the rock band class finally got their chance in the spotlight, performing a series of catchy songs last month at the school’s dodgeball tournament.

SCHS Rock Band (yes, it’s a class you can take!) #The soldier by @Iron Maiden during the intermission of our #SCHSDodgeballFinal pic.twitter.com/PeVORrGqlO

More of the #SCHSRockBand carry out #The soldier by @Iron Maiden a lap #SCHSDodgeballFinal pic.twitter.com/ZQyCmDQSAU

According to Chrabaszcz, the rock students stole the show.

“We picked some of the songs we already had going that fit well with the event, so we picked all of our high-energy songs that sounded like crazy rock songs and solos that really get the students excited,” said he declared.

“And it really did that – it made everyone in that gym scream. It was a really cool event.

The class currently seats 10 students in grades 10 and 11, which Chrabaszcz says is an extremely small class size compared to other classes at the school.

“The music that we produce, nobody in the school even knew what was going on,” he said. “We performed [at the tournament] and they did an amazing job.

“I think now that the students at the school are seeing what’s going on and what they could be a part of, I feel like I’m going to see a lot more people trying to get through those doors to get involved.”

He added that he was looking forward to finding the space and equipment needed to facilitate a large influx of students into the classroom next year.