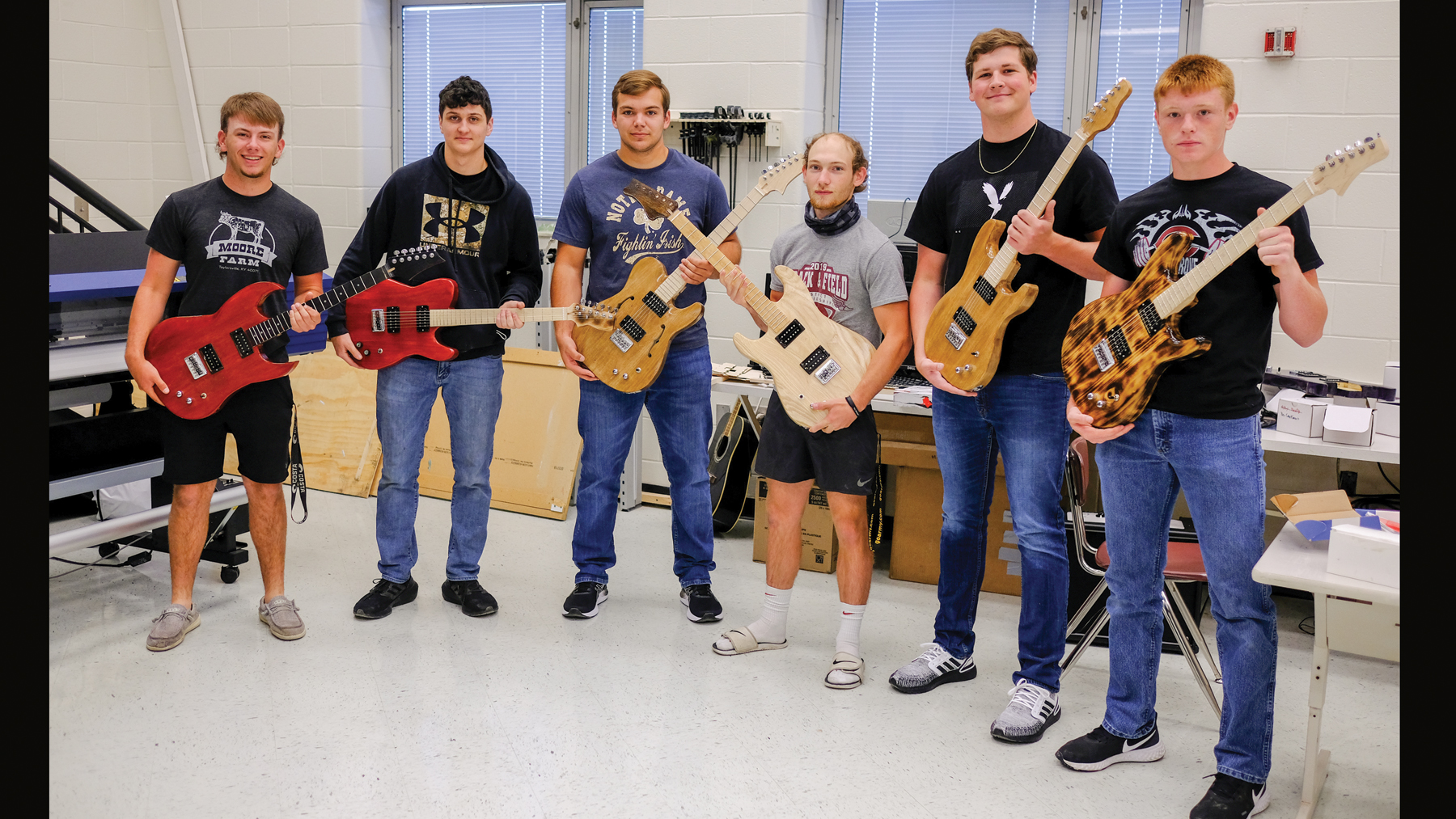 Tyler Waller, a technology teacher at Dawson-Bryant High School, helps a student adjust the neck of a guitar. (The Ironton Tribune|Jeremy Holtzapfel)

In the tech lab at Dawson-Bryant High School, students use all the skills they’ve learned over the past few months to build guitars, virtually from scratch.

It all started with a simple pick.

Tyler Waller, the tech instructor, had the idea to teach guitar building lessons six years ago when a colleague brought him a guitar pick. It was from the STEM guitar program. He has a QR code that led him to Sinclair University, which had a five-day course that taught teachers how to teach students how to build a guitar.

In his spare time, Waller is a singer and guitarist and quickly realized that students could apply many skills when assembling a guitar.

“I was looking for a project that would allow students to learn from STEM projects,” he said.

Students build almost anything they can in the Tech Lab.

“If we can build it, we build it,” Waller said.

Students design the body of the guitar on their iPad, then send the information to a computerized router that carves a piece of maple into the body. Then they use a neck from a kit, then spend many hours in class assembling the guitar, putting on strings and wiring it up so it can be connected to an amplifier.

Making a guitar is not cheap. Waller said it cost about $300 to buy a kit, which he said was expensive enough to ban some students from taking the course. So he enlisted community partners to help fund some of the costs and found industry partners like Harold White Lumber of Morehead, Ky., to supply the maple and walnut lumber, while Crystalac supplies the varnishes. and Starbond and Titebond supply the adhesives.

“The greatest thing about this project is that students can take home a guitar when the project is finished,” Waller said. “The only thing is that it has to be loud and it has to be full. And it’s 100% free for them.

Waller said that from an engineering perspective, it’s pretty important to build a guitar in a high school classroom because there are so many parts that go into it.

“We spend 27 weeks learning how to build the guitar in 2D and 3D computer modeling. The last nine weeks they build the guitars,” he said. “We teach children skills they can use in the future, no matter what they do.”

Waller was originally a computer engineer by trade, but 14 years ago decided to go into teaching.

He said he would much rather teach and interact with students than sit alone in a room working on computer systems.

“I thought that was what I wanted to do, but luckily fate had something else in mind for me,” Waller said. “With these guys, I make a difference and that’s what it’s all about.”