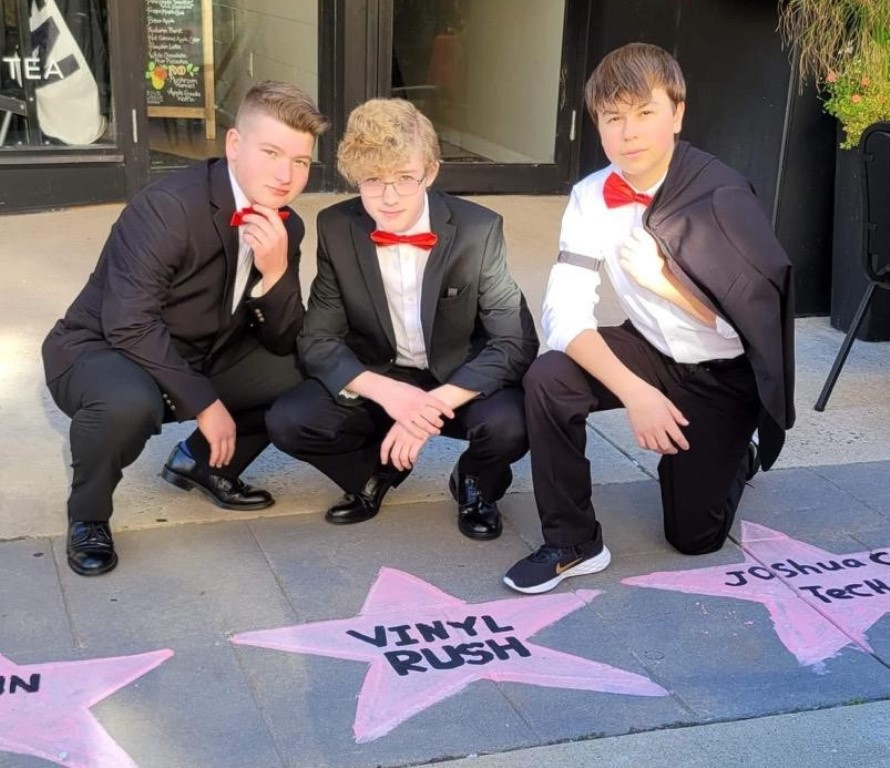 Saturday’s show was evaluated by a panel of judges, and during Sunday’s show, audience members voted for their favourites.

The judges were Melanie Geiger, former owner of Necessities New & Used Furniture in Hamburg; John Cusatis, owner and operator of the Aquatic Research Laboratory in Shartlesville; and Francesca Taveras, community ambassador and theater projectionist at GoggleWorks Center of the Arts in Reading in 2019 and staff member at Cosmic Art Studios in Pottstown.

Named the winning contestant by the judges on day one and voted People’s Choice on day two, Vinyl Rush took home both days of competition and the $600 prize.

The group performed three original songs, “Wake Me Up”, “Rooftops”, and “Drafted”. Members Cody Toplak, 14, on vocals and guitar; Nick Alvine, 15, on drums; and 15-year-old Dante Fioravanti on bass and backing vocals have been creating songs and mastering other artists’ material for a year and a half.

A night to remember

Hil Eldridge was the organizer and director of Hamburg’s Got Talent. When Adam approached her with the idea, Eldridge quickly got to work. Previously, Eldridge created a drumming workshop for Hamburg teenagers at the Strand. A theater kid in her youth who studied film at the University of Southern California, she runs creative events, retreats and festivals in the area.

“Event planner Hil Eldridge had a vision for the event and exceeded our expectations with lots of support from the community and businesses in the Hamburg area,” Adam said.

The theater created its own Walk of Fame by painting stars on the sidewalk outside the theater, providing a great photo moment for spectators and contestants alike. The stars were sponsored by contestants, individuals and local businesses.

“We wanted to provide Hamburg with a fun, inclusive and memorable evening for the whole community,” Eldridge wrote in his director’s notes.

Auditions were held at the theater for 22 acts in August, followed by encores and rehearsals.

“Some people had never been on any stage before,” Eldridge wrote. “We had to work to relax and take space with confidence. At every turn, the cast and crew were focused and engaged, driven and ready to show off their wonderful talents.

She was inspired by the positive attitude of everyone involved in the show.

“Hamburg is teeming with untapped creativity and I hope to provide more opportunities for artists of all stripes,” Eldridge wrote.

She thanked the Our Town Foundation, Hamburg Strand and the community “for their tireless support in making Hamburg’s Got Talent a hell of a good time.”

Audiences were encouraged to dress to impress for the event’s Old Hollywood costume contest and join in the pre-show entertainment.

Competitors entertained the sold-out crowd on both days. The 11 contestants, hailing from Hamburg and beyond, displayed a range of talents from lyrical dancer to ventriloquism.

Sophia Garretson, 12, sang “Rise Up.” Yesenia Munoz, 15, of Lenhartsville, danced to “Singing in the Rain.” Nadia D’Agostino, 13, of Feasterville, sang “Don’t Rain on my Parade.”

Ventriloquist Olivia Brenner, 10, from Hamburg performed with her ventriloquist friend Lilly. Her inspiration is Darci Lynne, a former winner of American’s Got Talent.

“I enjoyed watching her so much that my dad surprised me with my very own doll,” Brenner wrote in the program.

Justin Luigard, 38, from Reading, considers himself the ‘UPS singing man’ as he sings almost every day he drives his delivery truck. He sang “Forever Now”.

“I love doing karaoke and I’m grateful my wife introduced me to the opportunity at Hamburg’s Got Talent. I can’t wait to give it my all for this show!” he wrote.

“I’ve been singing for as long as I can remember. If you feel a good feeling, while I’m singing or it brings you back to a time and place, then it gives me joy. Maybe I’m not the best to sing the latest songs, but I manage,” Dietrich wrote.

Becka Youpa, 35, from Hamburg, sang “At Last”. She auditioned three times for “American Idol” and even sang in front of Clay Aiken. She sang the national anthem for the Reading Royals and at an NRAA Farm Show event.

“I joined my church’s adult choir when I was 9, and have been boring my brothers with my singing ever since,” the mother of an 11-year-old son wrote.

Magician Nate Heater, 26, of Pottsville, has been practicing magic for nine years and was the youngest winner of the Mr. Millersville competition at Millersville University. At 17, Heater was bedridden with a knee injury.

“I saw a magician on TV around that time and have fallen in love with magic ever since,” Heater wrote.

Amanda Nastasi, 29, from Hamburg, sang “Never Enough” from “The Greatest Showman.” She said singing has always been a part of her life.

“Growing up around musicians within my family inspired me to find my own song within myself,” Nastasi wrote.

Marian Hoffman, 69, performed ballet and her sister Joanne Eagle, 72, sang “Over the Rainbow.” Hoffman always wanted to be a dancer, but her parents couldn’t afford dance lessons. At 62, she made a to-do list and dance lessons were top notch. She has been dancing for seven years with teacher Michelle Wasik.

“The theater provides a smaller entertainment room creating a better atmosphere for the performers,” Kershner said. “Since the crowds were sold out both days, the event drew a lot of people to the city, many of them non-locals, which brought a lot of awareness to downtown and the nostalgic Strand Theater.”

This was the theater’s first attempt to host Hamburg’s Got Talent.

“We were very impressed with the turnout of the event’s artists, attendees, and financial supporters,” Kershner said. “We hope this will become an annual event.”

All proceeds from the event will support the Strand Theatre, housed in a 1799 building that was one of the first properties to be built in the city. The property was converted into a theater in 1920.

Our Town Foundation, a non-profit organization dedicated to the revitalization of downtown Hamburg, purchased the theater in 2013 with the aim of preserving and protecting it as a major asset and attraction within the community from Hamburg.