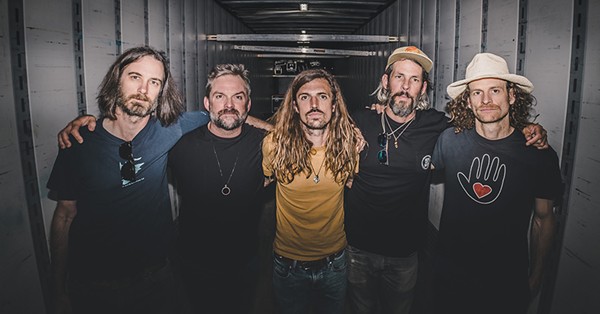 Dispatch are back on tour this summer literally as a band getting a fresh start with a new album in Break our fall.

However, neither the band’s lineup nor the new album ended up being what Chadwick Stokes or Brad Corrigan – the two members of Dispatch – had originally intended, although both results were for the better.

But that wasn’t the case, as Francis, who battled depression and struggled with life on tour, left the band in 2019.

“I think not having a root system on your tour, I think we saw that Pete really thrived when he was home and had roots,” Corrigan said in a video interview in late June. . “He was close to his wife and close to his children and close to all of his family… It’s definitely the hardest decision we’ve ever made as a band, but also the fairest.”

The decision to continue without Francis was only made after considerable effort to make things workable for all three band members.

“It was such a difficult time because we came back with kind of renewed enthusiasm and commitment to the band in 2015, 2016,” said Stokes, who joined Corrigan for the video interview. “And that winter, Pete hit lows that he’s never had before.”

Still, Stokes and Corrigan tried to make things work, going through hours of therapy with Francis in hopes of finding a solution. Dispatch even toured without Francis, hoping the time away from the road would solve its issues before finally concluding there was no way forward with Francis.

“It turned out to be very complicated, very difficult for all of us, but also for Pete to realize that the road is not a healthy place (for him),” Stokes said. “We really tried to handle it all as friends and partners.”

Going forward, Stokes and Corrigan decided against looking for a new bassist. Instead, Dispatch is now officially a duo, but with two longtime touring band members – guitarist Matt Embree and percussionist Jon “JR” Reilly – plus Mike Sawitzke (of the Eels), who co-produced all three. Dispatch’s latest albums, forming a five-piece unit both in the studio and on tour.

“I consciously think we weren’t just going to replace Pete because it’s impossible,” Stokes said. “So it was more of a thing where we pivoted to this (five-piece) kind of thing, and it was slightly different.”

The recently released Break our fall is the first album to feature Dispatch working as a five-piece studio band. But it’s not the album that Stokes and Corrigan originally planned to release.

They actually entered the studio with Sawitzke and co-producer John Dragonetti (of the Subs) in January 2020, emerging with a 10-song album that was supposed to be ready for release ahead of a major summer tour.

But as Stokes and Corrigan listened to the album, they weren’t sure that was all it could or should be. And when the pandemic hit soon after, they decided to put the album on hold. Looking back, Stokes and Corrigan say the cancellation of the tour by COVID was a blessing in disguise because there was no more rush to release the album – flaws and all – to coincide with a tour.

With the tour on hold, Stokes, Corrigan, their producers and bandmates polished some of the existing material and Stokes wrote new songs that became Break our fall into a 15-song album.

Break our fall arrived last year, and it’s been hailed as one of Dispatch’s finest albums in a career that dates back to 1996, when Stokes, Corrigan and Francis embarked on a DIY route. In the first six years, the trio released four full albums, toured extensively, and by 2002 had become arguably the biggest rock band most people had never heard of.

Within the band, however, tensions and musical differences had grown to the point where all three band members felt the need to take a break from each other and pursue other musical endeavors. They announced an indefinite hiatus.

But feeling the band hadn’t said goodbye to their fans, Dispatch scheduled a farewell show at Boston’s Hatch Shell for July 31, 2004. It drew 110,000 fans, stunning a music industry that largely ignored the following word of mouth that had grown as the band’s music spread to early file sharing websites like Napster and LimeWire, and the band gained a reputation as a stellar live act .

Popularity was confirmed in 2007 when Stokes, Corrigan and Francis reunited for three concerts in New York’s Madison Square Garden to raise money to fight famine and disease and support social justice and quickly sold out all three shows .

But it took nearly four more years before the trio decided to reunite for real, releasing a self-titled EP in 2011 and a full studio album, 2012’s circles around the sun, and make a grand tour. Then came another pause.

In 2015, Stokes, Corrigan and Francis came together for a meeting to chart a future path for Dispatch. The trio decided that Stokes would take on the role of lead songwriter and began working on new music. The group released two albums — 2017 America, Location 12 and 2018 Slot 13 – who both came from the same recording session, before reluctantly parting ways with Francis and making a fresh start with Break our fall.

The latest album retains the signature blend of fluid, upbeat folk and rock, but adds new dimensions to Dispatch’s established sound. An example is “The Legend of Connie Hawkins” (which tells the story of this star basketball player who was the victim of a college points-shaving scandal that falsely tarnished his reputation). It’s an epic, multi-faceted track with a dreamy, psychedelic feel and strong pop hooks. Different in another way is “May We All”, a pithy, hard-hitting track that shows a power pop facet that hadn’t been so pronounced in Dispatch’s sound.

Break our fall, however, continues the band’s tradition of having a topical element in the music – such as, for example, the references to George Floyd and the Black Lives Matter and Me Too movements on “May We All”. One of the songs added to the album, “Promise Land,” mixes commentary on racism (with a scathing reference to former President Donald Trump), corporate power and climate change.

“There was no shortage of lyric, genre protest (subjects),” Stokes says. “I think ‘Promise Land’ was a bit of a reflection of that.”

The band performs as part of the 2022 Dispatch and OAR Summer Tour with G. Love on Sunday, August 14 at the Michigan Lottery Amphitheater in Freedom Hill; 14900 Metro Pkwy., Sterling Heights; 313-471-7000; libertyhillamphitheatre.com. Doors open at 7 p.m. Tickets start at $20.