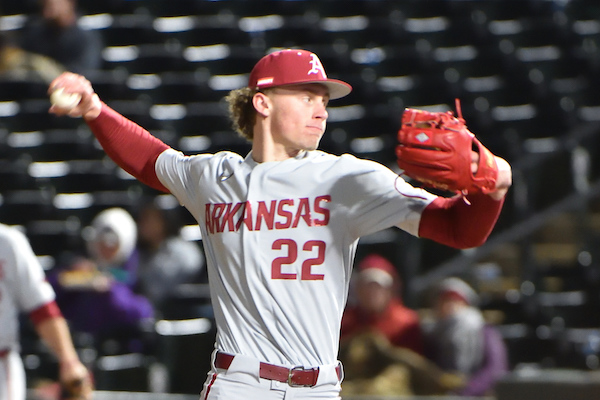 Missouri was once again in a generous mood in the seventh inning on Sunday, and the No. 4 Arkansas Razorbacks were forced to take advantage of the home team’s blunders.

After the Tigers handed the Razorbacks a pair of runs, Braydon Webb delivered the knockout blow – a two-run brace on alleged lost ground that propelled the University of Arkansas to a 6-4 series win in front of a crowd of 1,127 people. on a cold, windy day at Taylor Stadium in Columbia, Mo.

Arkansas (18-4, 5-1 SEC) won its 12th consecutive SEC series by rebounding from the Tigers (13-7, 1-5) after a 7-5 loss on Saturday that ended its streak of 12 consecutive wins. All three games were decided by two runs and featured butchered defensive plays by the Tigers and a shaky midgame bullpen exit by the Razorbacks.

“It wasn’t the greatest playoff, that’s for sure,” said Arkansas coach Dave Van Horn, who earned his 300th SEC win on Sunday. “I have seen much prettier. But I’ll take two out of three anytime on the road to here. I think we’re just disappointed that we didn’t play very well and last night we kind of let it go. The guys fought back today, they had a good attitude.

Arkansas sophomore Jaxon Wiggins (4-1) gave up a two-run homer on the backcourt opposite Luke Mann in the second inning that bounced off the wall and over before mowing down the Tigers for the next five innings.

Wiggins had 12 outs for 12 batters from second to sixth before giving up a hit-per-pitch with two outs.

More from WholeHogSports: Analysis of the series victory of the Razorbacks in Mizzou

“I just found the ground that worked and I continued to work on other grounds for the first two innings,” Wiggins said on SEC Network.

“Their pitcher, he settled in, but I also thought we made it easy for him sometimes,” Missouri coach Steve Bieser said on the Missouri Radio Network. “That’s something we’ve been pretty good at, is not letting a pitcher go very long with easy innings. But man, he had some easy innings there in the middle and we just didn’t do enough in that time and got a little sloppy defensively.

The Razorbacks, who squandered a golden scoring opportunity in the second set, broke through in the fourth against 6-8 right-hander Austin Marozas.

Jalen Battles hit a base-loaded single down the middle to tackle Chris Lanzilli, then Zack Gregory walked to bring Kendall Diggs up for a 2-2 draw.

The seventh inning proved decisive for the Razorbacks and messy for left-handed reliever Christian Wall (0-2) and the Tigers.

Cayden Wallace drew a walk to open the inning. Peyton Stovall followed with a chopper at third base that could have triggered a double play. However, second baseman Nander De Sedas had a long run to the sack and third baseman Justin Colon aired his throw over base and into right field, sending Wallace rushing to third.

Michael Turner hit a helicopter to first baseman Mann which brought Wallace home and was ruled a single as De Sedas was late to cover first base for Mann’s pitch.

Robert Moore jumped to first and Mann tipped him before spinning and throwing late to De Sedas early to load the bases.

“I just thought we should play traditional baseball here,” Van Horn said. “I just felt like it was going to give us a better chance of scoring some points with the way it went for us. He laid down a nice sack bunt.

Ace reliever Austin Troesser knocked out Lanzilli and edged Diggs before committing a refusal that brought another home run to make it 4-2. Referees huddled together to call the delayed disallowance on Troesser, who came down from the mound and faked a throw-in second with no defender near the bag. Bieser protested the appeal to no avail.

After Diggs pulled out some strikes, Webb threw a 1-1 pitch to third base and left to bring Turner and Moore home for a 6-2 lead.

“I think the reluctant call there really got… Troess[er] to do and pinpoint his locations,” Bieser said on the Missouri Radio Network. “Maybe it was bad pitch choice and bad location on that particular hitter. We knew how to attack him and we were trying to lose ground and we just kinda missed him where he could hit a double on the line and that was the difference in the game.

Wiggins opened the ninth by walking nine-hole hitter De Sedas and hitting Josh Day with a pitch. He knocked out Ross Lovich, but Tre Morris hit an opposite-right field single to make it 6-3 and chase Wiggins down after a 109-pitch outing.

Reliever Brady Tygart hit Torin Montgomery with a pitch to load the bases. The Razorbacks almost turned a double play on Carlos Peña’s slow roll in second, but Peña beat the rap first to make it 6-4.

Tygart retired pinch hitter Fox Leum on a soft liner to finish second to end the threat, then worked a perfect ninth with two strikeouts to post his team-record fourth save.

Lairy, likeable Nova Twins could be the next big British rock band