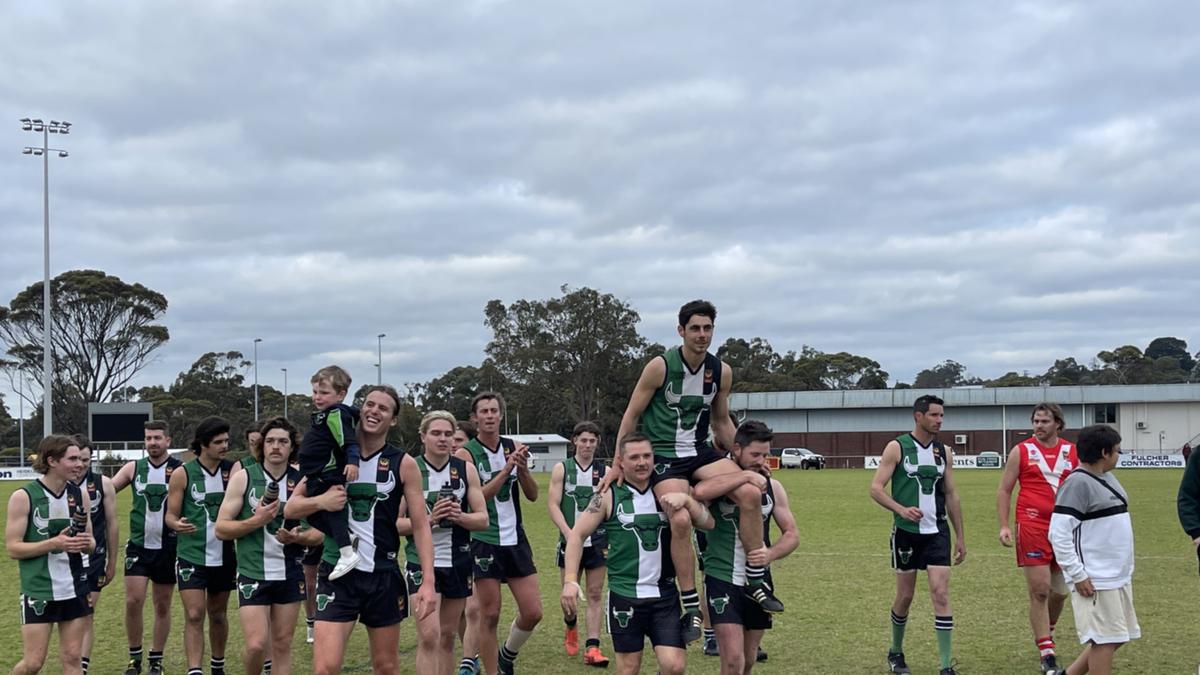 Mt Barker sweats on veteran Sam Lehmann’s fitness and intercepts defenseman Darcy Wallinger after they both failed to finish the game as the Bulls finished 42-point winners over North Albany in the final round of the regular season Saturday.

Wallinger injured his calf in the first half and Lehmann did not play after half due to a back injury, raising serious concerns for the Bulls ahead of the final which begins this week in the Great Southern Football League.

Bulls coach David Johnson says the pair and midfielder Scott Price, who got a bad stopper, were uncertain about facing the Railways in the qualifying final on Saturday.

“Darcy and Sam are both concerning and would be questionable at this point,” Johnson said.

“Scotty Price is wearing a bad cap and Rhys Hogg had another impact injury.

“So we’ll have to see how they go this week.”

Six goals in the first and last quarters gave the Bulls the winning momentum in the final, overtaking the Kangas at Sounness Park in round 15.

The Bulls took the win by 42 points with six unanswered goals in the first term as the Kangas had to pay for sloppy defense and wayward kicking in front of goal.

The home side led by 32 points on the first substitution and two goals from Dylan Gowdie and second majors to Lehmann and Steven Scott helped extend that to 41 on the long break.

However, the Kangas produced an inspired third period, bursting into the competition as their midfield took over.

The visitors had reduced the deficit to 17 points, but true to their form of the top two this season, the Bulls fought back forcefully, scoring two goals in the first three minutes of the final quarter to make life difficult for the Kangas.

Woods desperately tried to inspire the Kangas to a famous victory with another classy goal and talented teenager Kobi Keen added his second, but the Bulls had too many answers on the other end.

Zach Jackson rolled through midfield and had immediate effect before pushing forward to kick a telltale three majors as the Bulls ran out the winners 18.13 (121) to 11.13 ( 79).

Bryce Blaszkow capped off a terrific day in midfield with a goal in the final quarter, Joel Gray again won countless clearances and pumped the ball inside 50 regularly, while in his 150th league game, Lee Pavlovich was rock solid again and young Sebastian Ballard did little harm.

Zach Jackson finished with six goals after scoring three in the first term, but held off well in the second and third quarters playing as a deep forward.

His six goals earned him the Sean Plaisted Trophy as the GSFL’s top scorer with 63 majors.

The Kangas had wonderful contributions from Woods (three goals) and Keen while Davidson worked hard with Crudeli and talented teenager Lucas Ravenhill came on after half-time.

Experienced defenseman Alec Haskins limped off with a serious hamstring injury in the first quarter.

Kangas coach Brad Bootsma said the game went like the majority of their season.

“It was definitely the highlight of our season,” Bootsma said.

“We started slow, got back into the game and regained control, then fell back.

“Overall we have improved considerably which is nice even if it has not been correlated in wins.

“We’ve faced 40 players, debuted 14 guys and that in itself is a good thing.”

Will JJ McCarthy or Cade McNamara start at QB for Michigan?