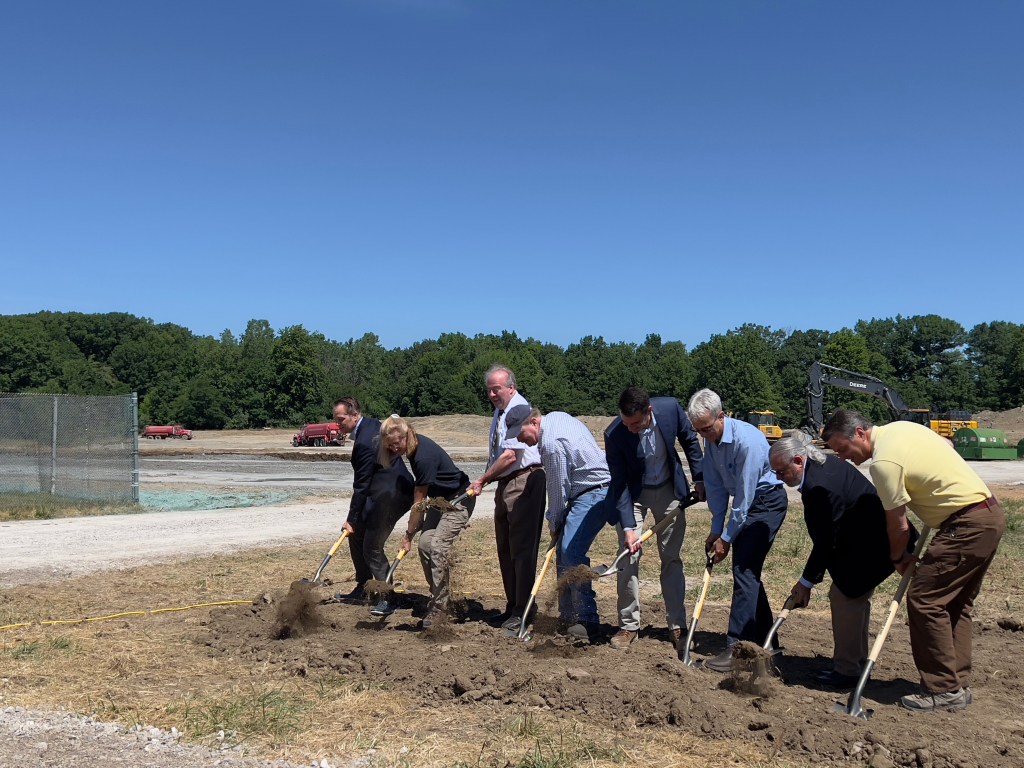 Also known as the Osborne Salt Fill, Mentor Marsh has been a source of chlorides that have impacted the marsh, causing water quality issues and altering natural vegetation. The objective of the project is to remove materials and restore the site to a stable and more natural state.

Construction is currently taking place adjacent to 9603 Deer Ridge Road, a neighboring property, in Mentor. A first shovelful of soil took place on the site on July 7 for the start of the cleaning of the site.

“We removed the cleanup equipment and stored it, and now it’s ready to start transporting salt and fly ash offsite,” said Jeremy Levenson, project manager at Great Lakes Construction. “We will start working from the west side to the east with this excavation. It varies approximately from 10 to 20 feet in thickness. There are about 115,000 tonnes expected to leave, and we will have 20 to 30 trucks running. The trucks can do maybe four to six loads a day.

According to the Cleveland Museum of Natural History, owner of Mentor Marsh, the area was designated by the National Park Service as a National Natural Landmark in 1966. A campaign to protect the marsh in the early 1960s was carried out with numerous local partners, including organizations represented at the inauguration of the works. Partners fought for legal protection of the swamp, and hundreds of $5 donors felt the permanent protection was worth it.

When most of the eastern basin had been acquired, the 800-acre wetland suffered as tailings from the salt mine washed into Blackbrook Creek. By 1973, most of the swamp forest trees and marsh plants had died, and the nearly four-mile-long wetland basin was topped by a billion stems of Phragmites, a highly flammable, non-native grass. and invasive plant from Eurasia that was 24 feet tall.

After another phragmites grass fire that burned 400 acres and the museum’s $80,000 WakeRobin Boardwalk, the museum decided to clear the tall grass surrounding the boardwalk. The museum was encouraged to undertake the massive restoration effort due to the capping of the landfill in 1987 and the diversion of Blackbrook Creek north along Highway 44, and due to monitoring the quality of the salinity water by the museum’s partner, Lake County Soil and Water. Conservation District,…

“At the Soil and Water District, we were more on the government side, working with state and federal agencies and coordinating with local governments our approach and involvement in this project over the past 25 years,” said Dan Donaldson, the l district administrator of the agency.

This is the largest conservation district restoration project they are working on, Donaldson said.

“This is going to provide the most immediate improvement to water quality, and it’s a major step in restoring the Mentor Marsh, which is, to my knowledge, the largest water-connected wetland in the Great Lakes.” , did he declare.

As the salt always flows into the swamp, it always prevents the plants from growing. As soon as it is out, there will be an immediate response in the marsh vegetation, Donaldson said.

The project is expected to be completed before winter, and funds to restore the historic creek valley have yet to be secured.

“After 56 years of 250,000 tonnes of rock salt in Blackbrook Creek, which feeds Mentor Marsh, this is hugely significant in that it is being removed by Great Lakes Construction,” said David Kriska, biodiversity coordinator for the Cleveland Museum of Natural History.

The restoration project is a major step in bringing the site back to its original state, Levenson said.

“The swamp is a landmark, so it will enhance the experience and the ecosystem,” he said. “It’s great for construction guys like me and my team here to get involved in environmental projects. We still consider it a treat. They are a bit more unique and less common than constructing buildings, roads, or bridges.

“In this job, due to the fact that so many people have such a long history and have worked hard to achieve it, once I got involved and started attending these meetings, it added a whole new level of pride in being able to be a part of the project.