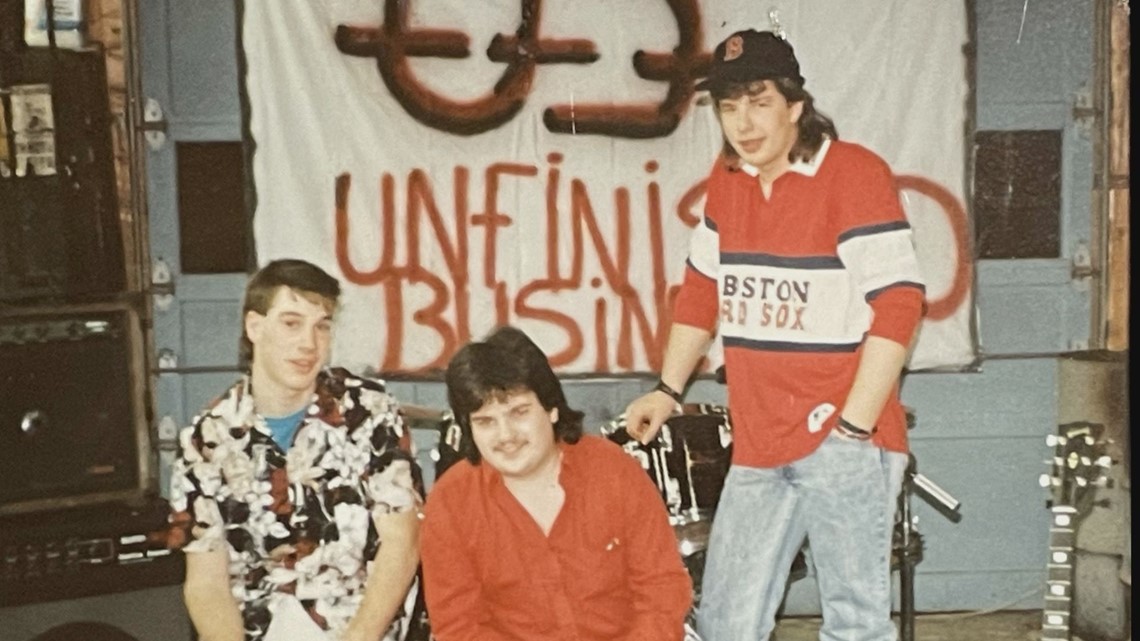 The band formed in the late 80s but disbanded three decades ago. Now they are back.

PORTLAND, Maine – Picture this. It was the late 80s. Music and mullets were life and garage bands were all the rage.

Enter Rob Babson and Dean Clegg, who at the time were students at Bonny Eagle High School in Standish. The two went from friends to bandmates, with Babson on guitar and vocals and Clegg on drums. They finally settled on the name Unfinished Business in 1988.

Babson said the idea for the name came from a classmate after learning that the band didn’t have all the members it needed.

“We’ve been playing too long without a bassist,” Clegg said.

“I can’t play anything without bass,” Clegg said.

“The White Stripes can, though,” Babson joked.

Bennett still remembers Babson approaching him during a theater rehearsal. At the time, Bennett said he had just started learning to play guitar and banjo.

“It was a Kingston,” Bennett said. “We bought it on a Wednesday in the summer and played our first gig on Saturday.”

This would become the start of a short-lived but semi-successful career for Unfinished Business. The trio performed at school dances, community events and even house parties. They played songs like “Blue Suede Shoes”, “Johnny Be Good” and other Chuck Berry hits. The practices took place in Bennett’s garage.

“My mom had a hair salon next to the garage, so we practiced in the garage, and you could hear pretty much everything in the hair salon,” Bennett said. “But they were very patient with us playing the same five songs over and over again.”

“It was my first time playing with someone, and it was fantastic,” Clegg said. “We just kept playing and we kept asking our parents to drive us somewhere to play.”

In the summer of 1989 the band were preparing for their biggest challenge yet as performers, the Battle of the Bands at the Roost in Buxton. The band made it to the final round and found themselves competing with a heavy metal band from Westbrook known as the Trooper. The guys remember showing up on their own school bus.

“They were a big deal,” Bennett said. “They had big speakers, and they had a guy on the balcony with a tracking spot on them.”

“No,” Bennett said with a laugh. “We thought they sucked.”

“I thought we were going to win based on the reaction of the crowd,” Clegg said.

The band will play for a few more months before officially disbanding at the end of the year. Over 30 years passed before the band members decided it was time to dust off the amps and start jamming again. The guys still have the same love for music, but they’ve adopted a new name: Unfinished Blues Band.

“It’s hard when you’re younger and you start in a band and you chase your dream and everything and the politics and the disagreements and, you know, when you’re younger you maybe don’t have life experience,” Clegg said. “It’s been a real joy because we’ve all been through it all, and we just play for fun, and we play to make ourselves happy. And that’s the best part. That’s why it’s great.

These days guys are writing their own music and even professionally recording their new songs. They see themselves as part of the American musical genre. Later this week the band will take the stage again at The Roost in Buxton to share their new songs and celebrate the band’s comeback.

They would love to find the members of the Trooper group to invite them to the show.

Tickets for the show are still available. To learn more, Click here.