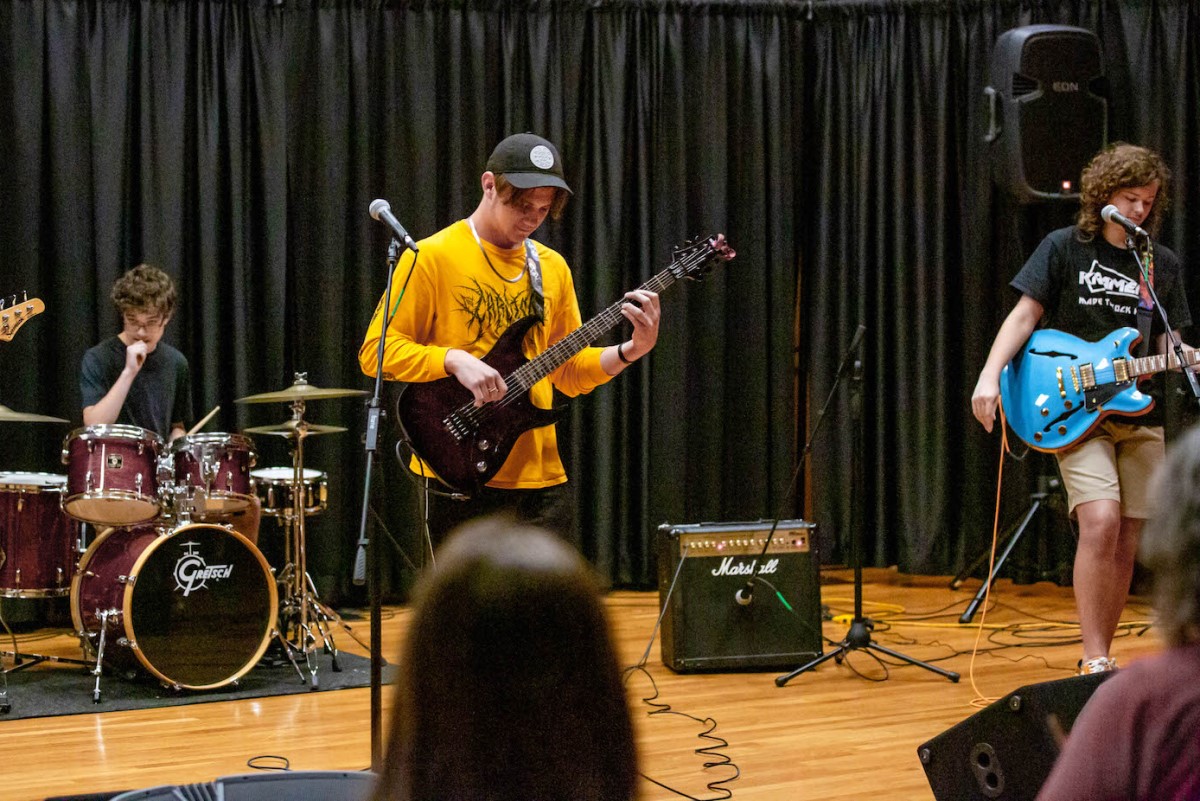 The group’s name, RACA, is an acronym its members coined on the last day of weeklong camp. The letters represent the first name of each member of the group.

R is for 11-year-old Rylan Ross, bassist for Richview Middle School. A is for Rylan’s older brother, Aiden, 17, a high school student from Clarksville. It’s for Cain Adcock, 14, a freshman at Clarksville High who, along with Aiden, conducted vocals and guitar. And the final A is for 14-year-old Andrew Bartel, a Northwest High School sophomore who played drums, including an impressive solo in the end-of-camp rock performance.

The group met on June 28 and at the end of the camp, four days later, gave a concert for family and friends at the Music / Mass Communication building at Austin Peay State University, performing two original songs. and some very stylized covers.

“Camp was really fun doing songs, but it was kind of a challenge because we only have four days to do stuff,” Cain said. “It was fun but stimulating.”

The camp was the first of two rock band camps CSA had planned. The second will take place from July 19 to 23. Registration is still open for this camp, which will take place from 1 p.m. to 4 p.m. daily in Austin Peay and will conclude with performances for friends and family at the end of the final day.

“Learn to play with the experience of others”

Austin Peay’s graduate music student Tyler Spuzzillo runs the camps and incorporates more than “jam sessions” into the week by teaching music theory workshops, rehearsal techniques and repertoire preparation. The biggest benefit for campers, however, is learning to play with other people.

The members of the RACA group were ready to go from the start. They wrote one of the original songs, “Pessimist”, in four days. The other original song, “Persistent”, was the one Aiden was working on. The group performed both songs during a performance for their families at the end of the camp.

“’Pessimist’ came this week, everything was this week,” Cain said. “Even then, we went through a bunch of revisions, and we got to this point. And Aiden’s song, “Persistent,” made me learn the riffs and push my voice a lot more than I usually do. “

Aiden, who wants to pursue music studies after high school, agrees: “Having the most experience, I still got something out of it because I got to do stuff with my voice that I didn’t. had never done before. It’s something I didn’t know I could reach with my voice.

Rylan had never played bass before camp, but since Andrew played drums, Rylan agreed to learn bass to complete the band.

“It was a challenge and I had to learn to play five songs in four days,” he said. “I had problems for the first four days and then last night I came home and Aiden helped me train and I got it.”

Aiden added, “He just broke and broke, and he got it. I think he learned that as long as he really put in the effort he could achieve anything he wanted.

“I really hope this band will stay together because the music we wrote was amazing,” he said. “And, honestly, we basically rocked everyone here. It’s a success in itself, and I feel we could do more.

Aiden, who has been playing guitar since the age of 12, agrees: “It was amazing. It was crazy. I wouldn’t change it for the world. This week was really good. I would have liked to have had something like this when I started out. The ability to play with an ensemble is absolutely amazing.

At the second rock group camp, students will be placed in their own rock group (three to six members) according to their musical tastes / interests. Then, they will learn how to manage, organize and create a functional rock band during masterclasses, music workshops and rehearsals.

Camp costs $ 150 to attend. All competent instrumentalists or singers between the ages of 10 and 17 are welcome.

To register or get more information, visit this page. To learn more about the Community School of the Arts, visit www.apsu.edu/csa.