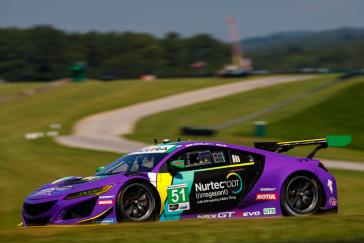 Rick Ware Racing achieved its best GTD qualifying result this weekend with the Acura NSX GT3 Evo22 and will start from the front row for tomorrow’s Michelin GT Challenge at VIR.

In the hands of Aidan Read, the n°51 set a best time of 1’45”077. Read will compete in tomorrow’s two-hour, 40-minute event at VIR alongside his co-driver Ryan Eversley, a previous VIR race winner aboard the Honda Civic Si and Honda Civic Type R TCR.

Quotation
Aidan Read (#51 Rick Ware Racing Acura NSX GT3 Evo22) qualified second: “It feels good! It’s gratifying because there has been a lot of work on the car recently to get to this position, on the front row. I’m happy to have been able to pick up the speed we had this morning and I think we have more in it, I don’t think that’s the end of the story for us.Ryan showed really good race pace in practice this morning and we’ve been on the podium for further than that. We brought our best package here so I’m really optimistic for tomorrow It’s credit to everyone at Rick Ware Racing, HPD and Acura for getting this Acura NSX started and hopefully we can win this race tomorrow.”

Where to watch the Michelin GT Challenge at VIR
Flag-to-flag coverage of VIRginia International Raceway will be available on CNBC beginning at 2 p.m. EDT Sunday, with live streaming on NBC Peacock.

Fans can listen to audio commentary via IMSA.com, RadioLeMans.com and XM Radio; and follow the race live via on-board cameras, IMSA radio and timing and scoring available worldwide on IMSA.com and the IMSA mobile app.

The reggae-rock group Iration organizes a concert in Woodward Park